The New York Police Department will now allow people to wear religious head coverings during booking photos as part of a settlement with several Muslim women who said they were forced to remove their hijabs.

The policy change stems from two separate lawsuits filed in 2018 against the NYPD in which four Muslim women claimed that their civil liberties were violated when they were allegedly forced by officers, some in front of male officers, to take off their hijabs for their booking photos. 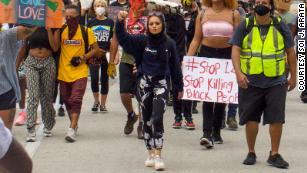 The hijab is a religious headscarf donned by Muslim women around the world that covers the wearer’s head and neck but not their face. Muslim women who choose to wear the headscarf do not take it off in front of men outside of their immediate families.
The police department’s new guidance extends to all religious headwear, including turbans worn by Sikhs and yarmulkes and wigs worn by Orthodox Jews.
Laila Ibrahim, one of the women who brought the suit, was arrested in 2018 and was asked to remove her hijab for the booking photo, but Ibrahim, who speaks limited English, said she tried to explain that she couldn’t due to religious restrictions.
Ibrahim told CNN she was denied a request for a translator because it was deemed unnecessary, and an officer then forcefully took off her hijab and took her picture in a public room full of men.
Speaking through a translator, Ibrahim told CNN that said she felt humiliated and frustrated.
“(The) hijab is part of someone’s identity,” she said. “Without it, I’m missing a part of my skin and body.”
Ibrahim said she hopes the department’s new policy will mean the NYPD will respect people’s right to their religious beliefs and not violate or oppress them.

The NYPD will still remove these religious head coverings temporarily during searches for any weapons and contraband. That removal and search will be conducted in a private area by an officer of the same gender.
For the booking photo, religious headwear can be kept on unless there is reasonable suspicion that the arrestee has a distinguishing feature of investigative value that is not fully visible, such as hair color or birth marks. 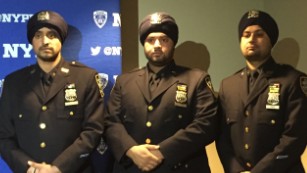 Arrestees may also be required to take off their head covering during photos if there is reasonable suspicion the person was not wearing one when the crime took place outside their residence, NYPD spokeswoman Detective Sophia Mason told CNN.
These uncovered photos will be taken in private by an officer of the same gender, Mason said.
Government agencies in New York and elsewhere generally allow people to wear religious head coverings in photographs. Hijabs may be worn in US passport photos, for example, and a majority of states permit religious exceptions for wearing a head covering in driver’s license photos, according to the ACLU.
Religious exceptions for booking photos, though, are less common. In June, an 18-year-old Muslim woman arrested during a Black Lives Matter protest in Miami said she was forced to remove her headscarf for a booking photo.
Afaf Nasher, executive director of the New York chapter of the Council on American Islamic Relations-New York, said the organization welcomes the NYPD change.
“For Muslim women who wear a hijab, this is a meaningful step in recognizing that they do not lose religious liberty even when detained by police,” Nasher said in a statement.
Still, she said, the new policy should not have required two and a half years of litigation.
“Until we see a shift in the NYPD that exhibits a willingness to implement reform that respects everyone’s rights, there will be no victory celebration. Instead, organizations like CAIR-NY will continue to demand change, and brave women like those who brought this legal challenge will continue to inspire it,” Nasher said. 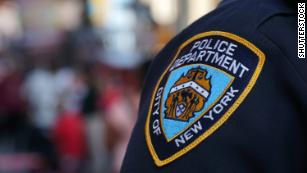 “It carefully balances the department’s respect for firmly held religious beliefs with the legitimate law enforcement need to take arrest photos, and should set an example for other police departments in the country,” Miller said in a statement to CNN.
Andrew Wilson, an attorney representing plaintiffs Jamilla Clark and Arwa Aziz in one of the two lawsuits, praised the policy change in an interview with CNN.
“This policy recognizes that asking someone to take off their religious head covering while in custody is the equivalent of asking a secular person to take off their shirt or their pants,” Wilson said. “These are garments that are worn out of respect for a religious practice and as an expression of modesty.”
“I think this policy respects that to the maximum extent possible while at the same time ensuring that the core concerns that the city had are met,” he continued.
As part of the new guidance, the NYPD must also require borough courts to provide private space for searching or photographing arrestees, train officers on the new guidance, and provide annual documentation to the plaintiffs’ counsel for three years on every case where a religious head covering is removed, according to the settlement agreement reached on November 5. 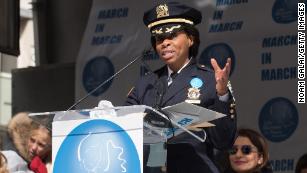 The settlement does not prevent the plaintiffs from seeking other monetary claims against the NYPD or city. It also specifies that the NYPD along with other officers named in the suit deny “any and all liability” and further deny that they have or currently engage in practices that deprived individuals of legal protections afforded by federal and state laws.
The agreement represents another way that the NYPD has tried to adjust to the diverse city it serves. In December 2016, for example, the NYPD began to allow Sikh officers to wear full turbans as part of their uniform.
“We want to make the NYPD as diverse as possible, and I think this is going to go a long way to help us with that,” then-NYPD Commissioner James O’Neill said at the time.
The NYPD is the country’s largest police department and one of its most diverse. Of the NYPD’s about 36,000 officers, 47% are White, 29% are Hispanic, 15% are Black and 9% are Asian, according to city data. Those numbers are similar to the city’s overall demographic makeup: 43% White, 29% Hispanic/Latino, 24% Black and 14% Asian, according to US Census data.
Source: https://rb.gy/6cog1f How many Muslims are there in the United States?